Speaker:
Asian States Eager to Cooperate with Iran for Sustainable Regional Security
TEHRAN (defapress)- Iranian Parliament Speaker Ali Larijani said that the Asian countries are willing to cooperate with Tehran to establish sustainable security in the region despite the US attempts to isolate Iran.
News ID: 79577 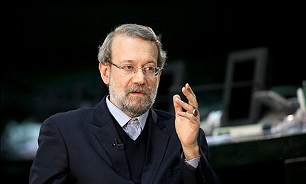 "The Asian states are generally inclined towards establishing sustainable security in the region in cooperation with Iran," Larijani told reporters on Sunday after returning from Turkey where he attended the 12th Asian Parliamentary Assembly.

He added that the member states do not agree the US behavior to ignore Iran and emphasize the need for close security and economic relations with Iran.

"We should use this capacity and activate them in the best way," Larijani said.

The Iranian parliament speaker said that the APA is regarded as an opportunity for improving economic relations between countries and developing all kinds of cooperation.

The Asian Parliamentary Assembly aims to promote peace in general, and in the Asian region in particular.

The APA was established as the Association of Asian Parliaments for Peace in September 1999 by Sheikh Hasina, acquiring its current name in 2006 during the Seventh Session of the AAPP.