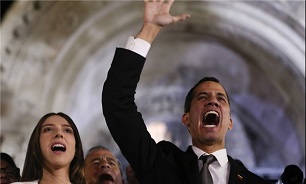 "The events of recent months have shown that 'Guaido’s project' has failed. Not only has it been bogged down by corruption scandals, but it also carries on the policy of provocative actions. Recently, the plans of his fellow party men to attack two military garrisons in the Venezuelan state of Sucre with the aim to seize weapons and continue to provoke armed clashes have been exposed," she stated, according to TASS.

According to Zakharova, this raises questions on whether the Venezuelan opposition led by Guaido and supported by the US can be considered democratic.

"We think that it is time for the opponents of Caracas to admit the objective truth: there is only one head of state in Venezuela — President Nicolas Maduro. A compromise decision can only be found through national dialogue, which is beginning to bring concrete results," Zakharova concluded, adding that Russia is ready to support inter-Venezuelan talks to the extent required by the sides.

On December 15, Venezuelan Minister of Communications Jorge Rodriguez stated during a press conference in Caracas that members of the Venezuelan opposition had plotted a terrorist attack against military units in the state of Sucre.

According to him, head of the Popular Will party Leopoldo Lopez tasked Guaido and Venezuelan MP Janet Fermin with attacking two military garrisons in Sucre. He added that the attacks had been planned for December 15 and financed by Colombia.

The political crisis in Venezuela exacerbated on January 23, when Guaido, Venezuelan opposition leader and parliament speaker, whose appointment to that position had been cancelled by the country’s Supreme Court, declared himself interim president at a rally in the country’s capital of Caracas.

Several countries, including the United States, most of the EU states, Lima Group members (excluding Mexico), Australia, Albania, Georgia and Israel, as well as the Organization of American States, recognized him as president.

Maduro, in turn, blasted the move as a coup staged by Washington and stressed that he was severing diplomatic ties with the US. In contrast, Russia, Belarus, Bolivia, Iran, Cuba, Nicaragua, El Salvador, Syria and Turkey voiced support for Maduro.