Iraq's Top Cleric Calls for Quick Formation of Government
TEHRAN (defapress) – Iraq's top Shiite cleric called for the speedy formation of a government and early elections as ongoing political wrangling caused Parliament to miss a deadline to name the next premier.
News ID: 79634 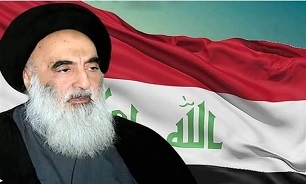 Grand Ayatollah Ali al-Sistani, in his weekly sermon delivered by a representative in the holy southern city of Najaf on Friday, called for political blocs to form the government quickly.

“We hope that there won’t be a long delay in the formation of the new government, and it must be an uncontroversial government that responds to the requirements of the current stage and be able to gain back the state authority and calm down the situation," Al-Sistani said, AP reported.

The constitution requires Parliament’s largest bloc to name a candidate for the premiership within 15 days of its acceptance of Abdul Abdul Mahdi's resignation, which expired on Dec. 19. The deadline was extended until Dec. 22, two lawmakers said.

Political deadlock has so far marred the naming of the next premier and the identity of the largest parliamentary bloc, which is legally required to name the candidate.

The Grand Ayatollah also said “the nearest and safest way to get out of the current crisis and avoid the unknown, chaos or internal fighting ... is to return to the people by holding elections early, after legislating a fair law for it.”

Anti-government protesters are calling for snap elections and a reformed electoral law that would give them greater say in how lawmakers are elected. They consider the current draft being considered by Parliament to be unsatisfactory.