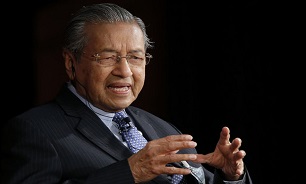 Addressing the closing ceremony of the Kuala Lumpur Summit 2019, he praised Iran and Qatar for being independent and capable of standing on their own feet despite being subjected to sanctions and embargoes.

"It is important for me to point out that Iran in particular, despite the years of sanctions, has been able to continue to progress and develop and it proudly stands as a nation with the fourth-highest number of engineers in the world,” the Star Online quoted him as saying.

"It was pointed out that if Muslim countries are independent and capable of standing on their own feet, we will not be subjected to such treatments," said Mahathir.

"Qatar too has been subjected to embargoes and like Iran, it has managed to rise above it and progressed impressively.

"However, such sanctions and embargoes are not going to be exclusively for Iran and Qatar.

"With the world witnessing nations making unilateral decisions to impose such punitive measures, Malaysia and other nations must always bear in mind that it can be imposed on any of us.

"That is the more reason for us to be self-reliant and work towards that with other Muslims nations to ensure that if and when such measures are imposed upon us, we are capable of facing it," explained the Prime Minister.

Some 450 delegates comprising leaders, intellectuals, politicians and non-governmental organisations from 56 countries have attended the four-day summit, amid criticism from the Organisation of Islamic Conference (OIC) for undermining the Saudi-based global body representing Muslim nations and organisations.

The Kuala Lumpur Summit 2019 will not replace any other platform for Muslims nor does it intend to create different categories, classes or undermine other Muslim nations, he stressed.

He said some had misunderstood the intentions behind the KL Summit – intentionally or otherwise – and the negative opinions were misplaced and not justified.

"The idea was to come together – assess our strengths and weaknesses as well as our assets. Then, we will use the strengths of one another to overcome the weaknesses we have.

"Simply put, if one of us have expertise in a particular area, we offer it to another or all the other participating countries and establish a realistic collaboration.

He said while it may not allay some of the suspicions and opposition, he reiterated that the summit was mainly focused on its objectives of finding solutions and programmes to assist the ummah.

"That is what we hope to do. We want to save ourselves and the Muslim ummah and we will persevere in this effort. We hope from this point onwards, our other Muslim brethren will see for themselves that what we intend to do is to unite the ummah on strategic and advanced technologies," he said.