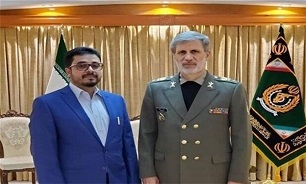 During the meeting with Brigadier General Hatami on Sunday in Tehran, al-Dailami expressed his gratitude to the Islamic Republic over Tehran’s stance against the Saudi-led war on the Arabian Peninsula country.

Also in the meeting, the two sides discussed issues of mutual interest and conferred on a host of issues, including ways to boost military cooperation between the two countries.

Brigadier General Hatami underlined the need to enhance the ties between the Iranian and Yemeni militaries, saying that Tehran backs a political solution to the Yemeni crisis.

"The Yemeni people are a smart, resistance and powerful nation and whatever they have used so far have been their own innovations," General Hatami told reporters in Tehran.

He added that Iran helps Yemen with playing an advisory role, and stated, "The Yemeni nation's rights have been trampled upon and a large number of tolls have been inflicted on them by the siege and different attacks and therefore, we help the Yemeni people only through an advisory role."

President Rouhani also defended the Yemeni people's right to respond to aggressions against their country.