Beijing Rebukes US over Anti-China Defense-Spending Law
TEHRAN (defapress)- Washington’s own track record exposes it as a destructive force on the international stage, the China’s defense ministry announced, after the US adopted a law that addresses Chinese issues such as the Hong Kong protests and Huawei.
News ID: 79708 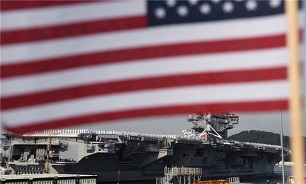 “The United States pursues unilateralism and protectionism,” Wu stated, offering also a reminder of how the US under President Donald Trump has abandoned the landmark Paris climate accord and the 2015 deal on the Iranian nuclear program, as well as having left UNESCO.

“This behavior makes it clear to the international community that the United States is the saboteur of the current international order,” he noted.

Wu urged Washington to drop “its Cold War mentality and hegemonic logic,” and to stop interfering in Chinese affairs.

The NDAA, among other things, reaffirms restrictions on Chinese telecom giant Huawei, calls for bolstering defense ties with Taiwan and allows the US to “impose consequences” on Beijing over its handling of the anti-government protests in Hong Kong, a self-governing region. Washington had earlier adopted a separate law that allows it to sanction Hong Kong and Chinese officials for violating the rights of the demonstrators.

China, for its part, has been accusing the US of inciting riots in Hong Kong and of endorsing the unrest in the city.