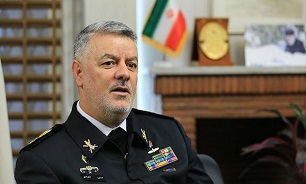 He made the remark in a TV interview on Sunday night, while discussing the details of Iran’s joint naval drill with Russia and China in the northern part of the Indian Ocean and the Sea of Oman, dubbed as the "Marine Security Belt," which wrapped up on Sunday.

“There is no threat facing the Persian Gulf region except for the presence of foreign forces such as the US, which are endangering the security of this region,” the Iranian Navy commander said.

He said the reason for holding the joint drill in the northern part of the Indian Ocean and the Sea of Oman was that this region was in need of more coordination for staging drills and providing security.

Khanzadi maintained that the three countries of Iran, Russia and China have agreed to stage the joint naval drill every year.

“We are seeking to achieve collective security, and for that purpose, we are inviting regional countries to join us [in the drills],” he added.

Khanzadi also said the drill, which covered an area of 17,000 square kilometers this time, would expand to further areas for future exercises.

The Iranian commander then described the efforts of some countries to form a coalition in the Persian Gulf as “pointless” and a waste of resources, which was not well received by other countries.