Protesters convene for second day of sit-in at US embassy in Baghdad
TEHRAN (defapress) – Hundreds of protesters surrounded the United States embassy in Baghdad on Wednesday for the second consecutive day to demand an end to Washington’s "intervention" in the country.
News ID: 79749 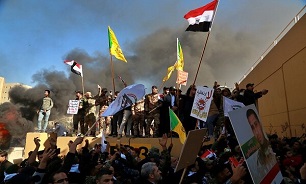 Thousands of angry Iraqi demonstrators gathered outside the gates of the US diplomatic mission in Baghdad to condemn Washington’s fatal military aggression that targeted Iraq’s Popular Mobilization Units (PMU) on Monday.

The US air raids killed at least 25 PMU fighters from the Kata’ib Hezbollah faction and injured over 50 others in Anbar Province.

Rising the flags of Hash al-Shaabi, the demonstrators, outside the embassy, are chanting ‘Death to America’ and burning US flags. They are also holding up posters calling for the US mission to be shut down and for the parliament to order US forces to leave Iraq.