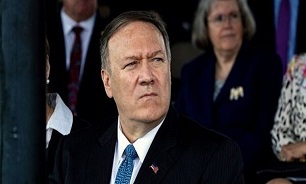 In continuation of Washington’s anger over anti-US demonstrations in Iraq, US Secretary of State Pompeo in his twitter account called Hash al-Shabi organization as ‘terrorist’ which is a part of armed forces of this country according to Iraqi law.

In a fresh and controversial statement on the situation in Iraq and anti-US protest by Iraqi people in front of US Embassy in Iraq yesterday, he [Pompeo] claimed that a part of Iraqi armed forces is ‘terrorist’.

In their harsh protest to the US deadly attack Sunday on Hash al-Shabi positions, Iraqi people, in addition to hold funeral procession of those martyred in the attack, arranged anti-US demonstrations in front of US Embassy in Baghdad.

According to Hash al-Shabi sources, at least 28 Hash al-Shabi forces were killed and 51 others injured following the US airstrikes in Iraq on Sunday.

Massive anti-US protests in front of US Embassy in Iraq followed by burning some gates of the Embassy and interference of the Embassy’s security forces. Thereupon, dozens of Iraqi people were injured.

Thousands of angry Iraqi demonstrators gathered outside the gates of the US diplomatic mission in Baghdad on Tuesday to condemn Washington’s fatal military aggression that targeted Iraq’s Popular Mobilization Units (PMU) on Monday.

“The US air raids killed at least 25 PMU fighters from the Kata’ib Hezbollah faction and injured over 50 others in Anbar Province.

The attack today was orchestrated by terrorists – Abu Mahdi al Muhandis and Qays al-Khazali – and abetted by Iranian proxies – Hadi al Amari and Faleh al-Fayyad. All are pictured below outside our embassy,” US Secretary of State Pompeo tweeted.