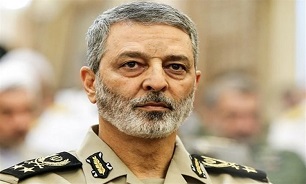 In a message on Friday, the Iranian Army chief offered condolences over the martyrdom of Major General Soleimani who was killed following a US air raid at Baghdad's international airport.

The top Iranian general also made it clear for the criminals that “the terrorist and brutal attack from the criminal US which is a clear sign of the US government’s terrorist temperament will not remain unanswered.”

“Undoubtedly, the front of resistance will be further strengthened following this terrorist measure by the vicious criminals and with blessing of the pure bloods (shed in the US attack),” Major General Mousavi added.