EU calls for observing 'restraint' in ME region
TEHRAN (defapress) – EU Foreign Policy Chief Josep Borrell in a statement issued on the recent developments in Iraq without condemning the US act of terror called for observing maximum ‘restraint’ and ‘responsibility in the Middle East region.
News ID: 79786 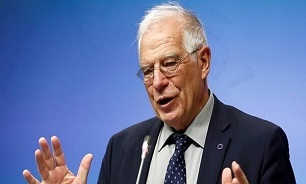 The current cycle of violence in Iraq must be stopped before it spirals out of control. The EU calls on all the actors involved and on those partners who can have influence to exercise maximum restraint and show responsibility in this crucial moment. Another crisis risks jeopardizing years of efforts to stabilize Iraq. Furthermore, the ongoing escalation threatens the whole region, which has suffered immensely and whose populations deserve life in peace. More dialogue and efforts to enhance mutual understanding are necessary to offer long term solutions to the stabilization of the Middle East. The EU stands ready to continue its engagement with all sides in order to contribute to defusing tensions and reverse the dynamics of the conflict.

It should be noted that the statement of EU foreign policy chief was published on Sat. following the US terrorist attack to the convoy of Hash al-Shaabi near Baghdad Airport on Fri. which led to the martyrdom of IRGC Commander of Quds Force Gen. Ghasem Soleimani and Abu Mahdi al-Muhandis the deputy commander of Iraqi Popular Mobilization Forces (PMU) and some of the other forces of the PMU.