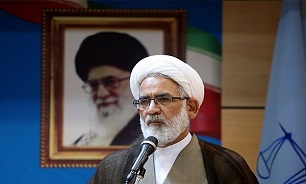 “We have penned a letter today and handed it over to the Ministry of Foreign Affairs to pursue the US terrorist act in the international bodies," he added.

He made the remarks on the sidelines of the commemoration ceremony of martyr Lt. Gen. Qasem Soleimani, held in Al-Zahra Mosque in Tehran.

The US assassination of Lt. Gen. Soleimani is considered as a crime by virtue of the international rules and regulations and this case will definitely be pursued by Iran, he said, adding, “although we have no faith in the efficiency of international communities, we are duty-bound to pursue this legal case in international bodies.”

Although the enemy took away a very valuable asset of the country with the assassination of IRGC Quds Force Commander Lt. Gen. Qasem Soleimani, the noble nation of Iran will continue his path with perseverance, Montazeri stressed.