Iran’s FM Holds US Accountable for Regional Tensions, Insecurity
TEHRAN (defapress) – Iranian Foreign Minister Mohammad Javad Zarif said the US government will be responsible for any escalation of tensions and insecurity in the region following the assassination of Iranian commander Lt. General Qassem Soleimani.
News ID: 79824 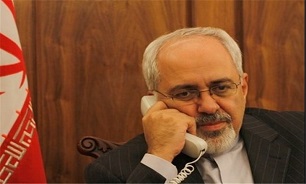 Germany’s Minister for Foreign Affairs Heiko Maas and British Secretary of State for Foreign Affairs Dominic Raab held separate telephone conversations with Zarif on Monday evening for talks about the latest regional and international developments as well as the 2015 Iran nuclear deal, known as the Joint Comprehensive Plan of Action (JCPOA).

In the conversations, the German and British top diplomats stressed the need to prevent an escalation of tensions in the region.

For his part, Zarif expressed Iran’s dissatisfaction with London and Berlin’s recent stances, and slammed the failure to understand the realities of the region as Europe’s strategic mistake.

The top Iranian diplomat strongly criticized the US, saying the American government will be held accountable for any tensions and insecurity in the region, particularly following the assassination of General Soleimani.

The top Iranian general was martyred in a US drone strike in Baghdad on January 3.

Zarif also denounced the European parties’ inaction in fulfilling their JCPOA commitments, described Iran’s compensatory steps as the Islamic Republic’s right under the JCPOA, and said that the only way to rein in the situation is for the Europeans to honor their commitments, according to the Foreign Ministry’s website.

Iran on Sunday announced the decision to take the fifth and final step in reducing commitment under the 2015 nuclear deal.