Maj. Gen. Bagheri:
US to face more harsh response in case of any further mischief
TEHRAN (defapress) – Chief of Staff of Iran’s Armed Forces Major General Mohammad Bagheri warned that the US will face a harsher response if it conducts any further mischief after the Islamic Revolutionary Guards Corps fired tens of ballistic missiles at American bases in Iraq.
News ID: 79829 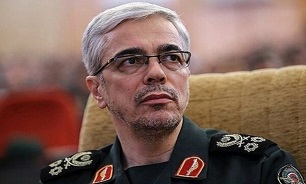 Following IRGC’s attacks to US bases in retaliation to the assassination of top Iranian commander, Lieutenant General Qasem Soleimani, Major General Bagheri said last night’s operations were only a part of Iran’s capabilities in responding the US regime’s mischief.

He stressed that any further misconduct by Washington will bring on a harsher and more severe response.

“It is time that the wicked US leaders understand the capabilities of the Islamic Republic and adopt a wise policy and pull their troops out of the region as soon as possible.”

In the first step of hard revenge on the US over the assassination of Lt. General Soleimani, Iran's IRGC force fired tens of ballistic missiles at Al-Asad base in Iraq in the early hours of Wednesday.

Ayn al Asad is an Iraqi airbase that the US terrorist forces are stationed there.

According to some sources, the number of missiles fired is 30 and also huge blasts have been heard in Arbil capital of the Iraqi Kurdistan region.