Iran Summons UK Envoy over British Support for US Assassination of Gen. Soleimani
TEHRAN (defapress) – Britain’s ambassador to Tehran was summoned to Iran’s Ministry of Foreign Affairs over the support that a number of top UK officials have voiced for the US assassination of Iranian commander Lt. General Qassem Soleimani.
News ID: 79836 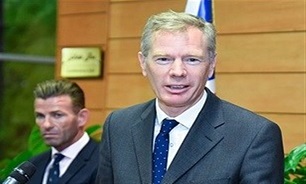 Robert Macaire was called in by the Iranian Ministry of Foreign Affairs on Tuesday, January 7, following the unacceptable remarks made by the UK prime minister, foreign secretary, and defense secretary about US President Donald Trump’s terrorist action to assassinate General Soleimani, Abu Mahdi al-Muhandis, who was the deputy commander of Iraq’s Popular Mobilization Units (PMU), and their companions.

In a meeting with the British ambassador, the Iranian Foreign Minister’s assistant for European affairs strongly condemned the remarks made by the UK officials, and presented Iran’s strong protest to the envoy against the British stances.

The Iranian diplomat maintained that the US’ terrorist action has been in contradiction to the principles of international law and in violation of Iraq’s national sovereignty, as acknowledged by the world.

He also stressed that from the viewpoint of the Islamic Republic of Iran’s people and government, such British stances are tantamount to collaboration with the US’ terrorist measure, are not justifiable and acceptable by any means, and that the UK could be considered as an accomplice in this crime by adopting such stances.

The Iranian Foreign Minister’s assistant for European affairs then pointed to the presence of tens of millions of people from the Iranian and Iraqi cities in the funeral of the revered martyrs and the heroes of the fight against Daesh (ISIS) who played a key role in eliminating Daesh from the region, saying the UK envoy must have witnessed the epic funeral. He also stressed that the Iranian nation will not forgive those sympathizing with the US’ measure.

The Iranian diplomat finally called on the UK ambassador to convey the Islamic Republic of Iran’s protest to London, according to the Foreign Ministry’s website.

In turn, the British envoy said his government believes that escalation of tensions is not in the interests of anyone, and asked Iran to show more self-restraint in the current delicate situation in the region.

Macaire said he will convey Iran’s message to London immediately.