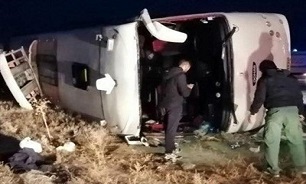 The bus was heading to Gonbad Kavoos from the capital Tehran when the accident took place in the Doab region of Savadkouh early on Thursday.

The injured were transferred to nearby hospitals.

Police say the accident was caused by a defect in the vehicle’s brake system.

Iran has a good road network but accidents caused by reckless drivers kill thousands each year.

Around 17,000 people were killed in road accidents across Iran in the Iranian calendar year that ended in March 2019.