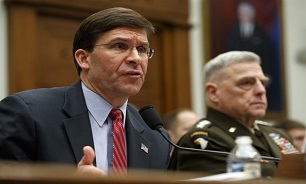 Mark Esper said on Sunday he had not reviewed evidence indicating General Soleimani posed an “imminent threat” to Americans, despite the Pentagon previously saying the commander of the Islamic Revolution Guards Corps (IRGC) Quds Force was “actively developing plans to attack American diplomats and service members in Iraq and throughout the region”.

He appeared to cast doubt on Trump's claim that the Iranian general had been working on plans to attack four US embassies at the time of his assassination.

“What the president said was he believed that there probably and could have been attacks against additional embassies,” the US defense secretary said in an interview with CBS.

White House officials have also echoed those claims, without providing specific indications as to which embassies or US sites may have been targeted in additional attacks organized by General Soleimani.

Margaret Brennan, the CBS host, responded to Esper by reciting the president’s own words, adding, “Probably and could have been … that sounds more like an assessment than a specific tangible threat with a decisive piece of intelligence.”

Esper said the president never claimed there was a “specific, tangible” threat and noted he “didn’t cite a specific piece of evidence”.

“Are you saying there wasn’t one?” Brennan asked the defense secretary.

Esper replied, “I didn’t see one with regard to four embassies.

“What I'm saying is I share the president's view that probably- my expectation was they were going to go after our embassies. The embassies are the most prominent display of American presence in a country.”

In another interview with CNN, the US defense secretary also suggested he had not seen any specific evidence of an imminent threat, adding only that there was “an intent” to target the US embassy in Baghdad.