Rouhani calls on Judiciary to form special court for plane incident investigation
TEHRAN (defapress) – President Hassan Rouhani called on the Judiciary to make every effort to accelerate the investigation process of a Ukrainian passenger plane that was ‘unintentionally downed’ near Tehran last week.
News ID: 79899 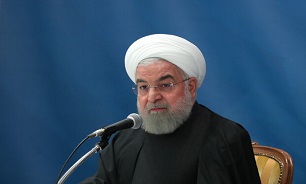 “The Judiciary should establish a special court, headed by a senior judge and tens of experts, to investigate the plane incident,” Rouhani said on Tuesday on the sidelines of a domestic agricultural exhibition in Tehran.

The president said, “Since the moment I realized the incident could have happened due to an unusaul reason, I made every effort to reduce the investigation time so that we would know the cause of the crash.”

Rouhani further said, “I promise all the families of the victims in Iran and all other countries – as I told their leaders and authorities in phone conversations – that the government will follow the case with all its capacities and power.”

“This is not an ordinary case, and the whole world is watching us,” he added.

A Ukrainian plane with 176 people on board was unintentionally downed near the capital city of Tehran on Wednesday amid the heightened tensions between Iran and the US in the past weeks. The victims include mostly Iranians and Iranian-Canadians, 11 Ukrainians, and four British nationals.