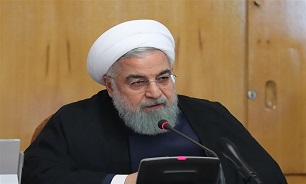 Speaking at a weekly cabinet session on Wednesday, Rouhani advised the European parties to the Joint Comprehensive Plan of Action (JCPOA) to honor their commitments.

He also reiterated that Iran’s move to reduce its JCPOA commitments is reversible, stressing that the notion that Tehran is after nuclear weapons is totally wrong, since all of Iran’s activities are being monitored by the International Atomic Energy Agency (IAEA).

Rouhani warned the European leaders that they will suffer losses by taking "wrong steps", advising them to return to the JCPOA.

"I wonder what the prime minister of (Britain) is thinking and how he calls for discarding the JCPOA and implementing Trump’s plan. Has Trump done anything other than violating laws and infringing commitments?" the Iranian president added.

He also said that Europe has failed to take any action against the unilateral measures by the Trump administration, such as Washington’s pullout from the Paris Agreement, and, therefore, Iran cannot rely on the Europeans’ promises.

"You should apologize to the people of Iran for your fear and incapability in the face of the US," Rouhani told the EU3, calling on them to live up to their JCPOA obligations.

"I advise Europe and the US not to fuel regional problems," he said, stressing that regional insecurity is not in the interests of anyone and would harm the entire world.

The Iranian president further lashed out at the US government for making the region insecure, imposing sanctions on people of Iran, and plundering Syria’s oil, saying that the only remedy is for regional nations to stand against the "real criminals".

"Today, American troops are not safe in the region, and European troops may also be insecure tomorrow," Rouhani said, calling on the foreign military forces to leave the region without a war.

In May 2018, the US president pulled his country out of the JCPOA.