Iranian Official:
US Complicit in Narcotics Production in Afghanistan
TEHRAN (defapress) – Secretary-General of Iran’s Anti-Narcotics Headquarters Brigadier General Eskandar Momeni deplored some Western countries’ lack of cooperation in the campaign against illicit drugs and said the US forces even support production of narcotics in Afghanistan.
News ID: 80037 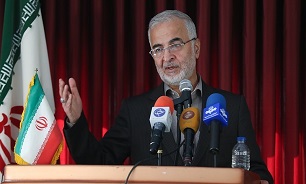 In a speech in Tehran on Tuesday, Brigadier General Momeni highlighted Iran’s achievements in the anti-drugs campaign and said the European countries not only do not help the Islamic Republic but are also blocking the country’s campaign.

“Drug production in Afghanistan is increasing every year. Now there is no doubt that US forces and occ

They are working to create insecurity in the region by any means, including supporting drug production in Afghanistan, he added.

“In a trip I had to one of these European countries, an official of the country, which is located on a major drug (transit) route, announced that they had only discovered 2.5 kg of illicit drugs in a year, which surprised me greatly,” the official went on to say.

According to the UN Office on Drugs and Crime, the Islamic Republic is netting eight times more opium and three times more heroin than all other countries in the world combined.