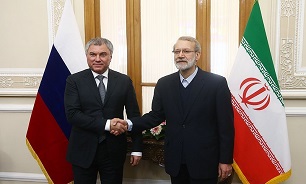 In a meeting with Chairman of the Russian State Duma Vyacheslav Viktorovich Volodin, held in Tehran on Monday, Larijani hailed the fruitful cooperation between Iran and Russia in the fight against regional terrorism.

Hoping for the expansion of parliamentary ties between the two countries, the Iranian speaker said Tehran and Moscow are resolved to strengthen their strategic relations.

He also hailed the joint regional strategy of Iran and Russia as a “successful model” for the efforts to ensure sustainable security, and expressed hope for the continuation of the mutual cooperation.

For his part, Volodin said Russia and Iran both stress the need for supporting peace and honoring international agreements, while certain countries have violated international treaties by ignoring the principles of non-interference in the internal affairs of sovereign states.

He also decried the double standards in international diplomacy, saying it is unacceptable for a certain government to fulfill its own interests and seek dominance over the world.

Volodin also highlighted the significance of enhancement of parliamentary ties between Russia and Iran, and called for collective efforts to overcome the regional challenges.