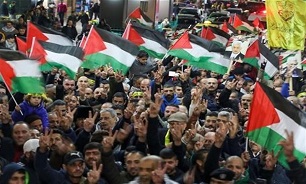 The protests took place at the northern entrance of the cities of Ramallah in the occupied West Bank, Al-Bireh and Jaballa in the Gaza Strip.

The demonstrators also burned Israeli and American flags to decry US President Donald Trump's proposed 'deal of the century'.

Similar clashes were reported in (Al Khalil) Hebron, the Arroub refugee camp and the town of Sair, north of Al Khalil, where soldiers also used the tear gas and rubber bullets to disperse the protesters.

The Palestinians have planned more massive rallies across the occupied lands after Friday prayers.

Secretary of Fatah Movement in Ramallah Mowaffaq Sehwail said that "the Palestinian people are ready to sacrifice their blood for sticking to the Palestinian cause, and for having Jerusalem (Al Quds) to be the capital of Palestine."

On Tuesday, Trump unveiled his fabled 'deal of the century', a set of proposals to end the Israeli-Palestinian conflict, alongside Israeli Prime Minister Netanyahu in Washington DC.

Palestinian President Mahmoud Abbas rejected the plan with "a thousand no's," as being one-sided in favor of Israel.