Iran, Turkey Urge Muslims’ Firm Stance against ‘Sale of Palestine’
TEHRAN (defapress) – Iranian Foreign Minister Mohammad Javad Zarif and his Turkish counterpart, Mevlut Cavusoglu, called on Muslims nations to take a firm stance against the US government’s so-called “deal of the century” plan, saying it is tantamount to the sale of the Palestinian land.
News ID: 80099 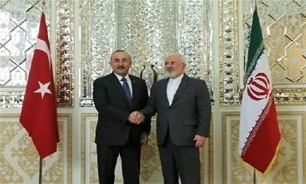 In a telephone conversation on Sunday night, Zarif and Cavusoglu held talks on a range of issues, including the latest developments in the Muslims world.

They deplored the deal of the century plan and called on the Islamic world to take “a firm stance” against the sale of Palestine.