US Sanctions on Iran’s Medicine, Food Imports Nothing but Terrorism: President
TEHRAN (defapress) – Iranian President Hassan Rouhani deplored the US government’s sanctions against the Islamic Republic as acts of terrorism and said Washington is lying when it tells the world that the embargoes have not targeted Iran’s access to food and medicine.
News ID: 80127 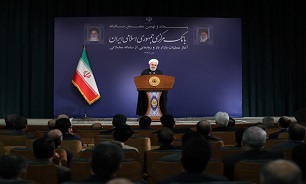 “I don't think any country has ever imposed sanctions on any nation’s medicine (imports other than the US),” Rouhani said in a speech in Tehran on Wednesday evening.

“Americans are lying (when they say) they have not sanctioned medicine,” he said, adding, “When they impose sanctions on banks and create problems for our sales and export routes, this means that America is committing a terrorist act against Iran.”

“Today, America is not the enemy of a government…,” the president stated, adding that the US government is a terrorist today and is committing an act of terrorism by imposing sanctions on a great nation to which the world is indebted for its services in science over the past centuries.

Iranian Foreign Ministry Spokesman Seyed Abbas Mousavi said on Monday that a Swiss humanitarian channel recently launched for exporting food and medicine to Iran proves that the products have been sanctioned by the US.

The humanitarian channel to bring food and medicine to Iran has started trial operations, the Swiss and US governments said last Thursday.