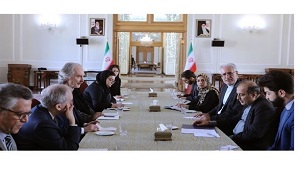 Their talks revolved around the situation in Syria’s Idlib, the Arab country’s Constitutional Committee, the reconstruction process, the task force on the exchange of detainees and abductees, the status of the displaced, as well as other humanitarian issues.

They also discussed the grounds for mutual cooperation between the Islamic Republic of Iran and the United Nations for contribution to the settlement of the crisis in Syria.

In the meeting, the Iranian official touched upon the most recent developments in Syria and the situation in Idlib, and emphasized the need for fighting against terrorism and implementing the Sochi Agreement.

The Islamic Republic of Iran stresses the need to protect the lives of civilians and prevent them from being used as human shields, and is prepared to help resolve the conflicts between Turkey and Syria, Khaji said.

The two sides also emphasized the settlement of the crisis in Syria through political processes and Syrian-Syrian dialogue.

For his part, the secretary-general’s special envoy for Syria, who has traveled to Iran within the framework of regional consultations, gave a report of a series of activities and measures, particularly his meetings with the Syrian officials, and praised the Islamic Republic of Iran’s support for continuation of the activities of the Constitutional Committee.