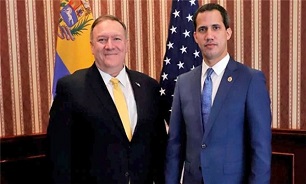 Pompeo and Guaido "agreed to redouble efforts to provide the Venezuelan people with what they have been demanding for years: an end to Maduro's dictatorship and the restoration of democracy, economic prosperity, and dignity to the people of Venezuela", the readout said, Sputnik reported.

The two officials conferred on ways democratic actors and international partners can together open the path to a transitional government responsible for overseeing free and fair presidential and National Assembly elections, the readout added.

In his State of the Union address on Wednesday, US President Donald Trump welcomed Guaido, who was also invited to Capitol Hill, as "the only legitimate president of Venezuela".

He also vowed to "smash and break" the "tyranny" in the Latin American country.

Guaido illegally proclaimed himself interim president of Venezuela back in January 2019, after disputing the results of the May 2018 election in which Maduro had won. Guaido was endorsed by the United States and its allies in Latin America.

Maduro has called Guaido a US puppet trying to orchestrate a coup in Venezuela with the help of the United States so that Washington could gain control of Venezuela's natural resources, namely its vast oil assets.

The US has repeatedly claimed Venezuela under Maduro is a "dictatorship" where the citizens "suffer repression", promising to return democracy to the country. Washington has also introduced a series of economic sanctions against Caracas.

A number of countries, including Russia, China, Cuba, and Turkey, have rejected Guaido's claims to the presidency and continue to recognise Maduro as the only legitimate president of Venezuela.