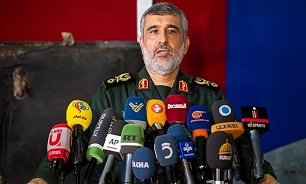 "By developing the technology of movable nozzles, we are able to control solid-fuel missiles in the outer space and in spacecrafts, satellite carriers and anti-air defense shield missiles," General Hajizadeh said, addressing a ceremony to unveil a new home-made missile named Ra'ad (Thunder) 500 with a composite engine in Tehran on Sunday.

Elsewhere, he said that air defense missiles should bear the most lateral acceleration and the composite body which has been designed by the Iranian experts can be used in this type of missiles in addition to ground-to-ground missiles.

The new missile weighs half of Fateh class of missiles, which has a steel body, and can hit targets 200km farther in range than Fateh.

Meantime, the IRGC's Aerospace Force unveiled missile engines with movable nozzles. Combination of composite body and movable nozzle in missiles paves the ground for Iran to use solid-fuel engines for sending satellites into space.