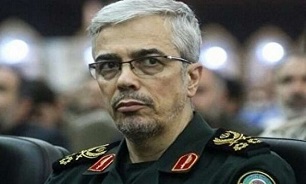 samaneh moslemi/ Boosting defensive power is a manifestation of strategy of becoming stronger against enemy, he added.

He made the remarks ahead of the 41st anniversary of the Islamic Revolution and added, “the Armed Forces are considered as the strong and powerful defense and security arm of the country.”

In the current situation that enemies of the country try to undermine the true image of the Islamic Revolution, unity, amity, resistance and perseverance of the people against conspiracies waged by enemies is the key to success and excellence of the noble nation of Islamic Iran, The Chief of Staff of Iran’s Armed Forces Major General Mohammad Bagheri highlighted.