Ex-IRGC Commander:
Resistance against Arrogance Successful Model for Nations
TEHRAN (defapress) – The former commander of the Islamic Revolution Guards Corps (IRGC) highlighted Iran’s major advances in various scientific and military areas and said all people in the region know that resistance against arrogant powers is the most successful model for nations.
News ID: 80172 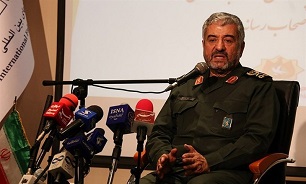 “The outstanding feature of the Islamic Republic is nothing but popular resistance,” Major General Jafari, who is also the head of Hazrat Baqiatollah al-Azam Cultural and Social Headquarters, said in a speech on Sunday.

“This resistance is also influenced by the spiritual life of our society, the source of which is the blood of the martyrs,” he added.

The commander further pointed to the developments over the past 10 years and said, “All the people of the region are well aware that the most successful model for the progress and prosperity of nations is resistance against the domination of the global arrogance (the US).”

The remarks come against the backdrop of increased tensions between Tehran and Washington after the US forces in Iraq assassinated Iran’s revered commander Lt. Gen. Qassem Soleimani.