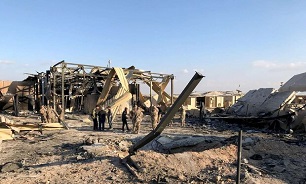 Pentagon revealed on Monday that so far 109 US service members have suffered traumatic brain injuries following IRGC’s missile attack at al-Asad airbase back in Jan. 8 which was a response to US’ assassination of Iranian top commander Lieutenant General Soleimani.

The number shows a significant increase from the initial 64 injuries that was reported a week ago. At the White House, Trump adamantly denied the Iranian missiles left any casualties. But Tehran said the US military conducted at least nine sorties after the operation, taking the wounded to Jordan and the Israeli-occupied territories, while Chinook helicopters transferred the injured to a US hospital in Baghdad.

Out of despair and under pressure from Congress, the Trump administration has gradually announced casualties from the Iranian attack, most recently claiming that 64 US troops have been diagnosed with traumatic brain injuries.

About 408,000 service members have been diagnosed with the injury since the year 2000, according to Pentagon data.

Iraqi lawmakers unanimously approved a bill last month that calls for the withdrawal of all US-led foreign troops from the Arab country in the wake of the assassination of the two top commanders.