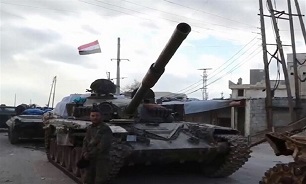 The towns of Khan al-Assal, southwest of Aleppo, and al-Rashidin, west of Aleppo, were liberated following concentrated operations against terrorists, SANA reported.

The latest developments came after Syrian army units on Monday managed to wrest control of a key highway connecting the capital Damascus to the second-largest city Aleppo for the first time in more than seven years.

The liberation of the M5 motorway, which links the capital Damascus to the major cities of Hama, Homs and Aleppo, comes on the back of a months-old operation by the Syrian army to liberate Idlib Province.

Idlib and the area north of Aleppo form part of the only large territory still in the hands of militants. The Syrian military has managed to undo militant gains across the country and bring back almost all of Syrian soil under government control.

In a statement carried by SANA on Sunday, Syria’s General Command of the Army and Armed Forces announced that troops making territorial gains in the eastern countryside of Idlib had linked up with their counterparts advancing in southern Aleppo at one crossing point, establishing full control over a number of towns and strategic hills and nearly 600 square kilometers of land.