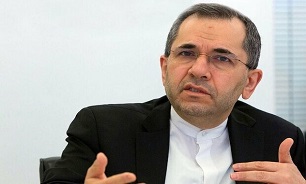 In a statement released on Friday, the envoy deplored the US for its belligerence, saying that such remarks are in continuation of Washington’s propaganda campaign against Iran.

He said apart from the unfounded claim about the confiscation of Iranian weapons on route to Yemen, the US abuses UN reports to force them to say that Iran is responsible for attacks on Saudi Arabia's oil installations. This is while the report has made no reference to Iran's involvement in the strikes, he said.

The US military claimed on Friday that one of its warships had seized Yemen-bound weapons believed to be of Iranian "design and manufacture," while the American mission to the UN skewed one of the world body’s reports to flesh out a claim by Washington and its allies that Iran had struck Saudi Arabian oil facilities last September.

The UN Experts Committee released a report on Wednesday dealing with issues, including sending arms to Yemen and strikes on Saudi Arabia's oil installations, but the experts failed to conclude that Iran was the source of sending the arms to Yemen.