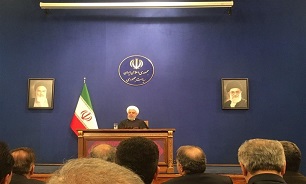 “Despite what the ill-wishers wanted, our problems this year are less than last year, and despite the fact that conditions are tougher than last year, all social, security and economic indices show that the United States’ maximum pressure has failed and is now behind us,” Rouhani said during a press conference with domestic and international media in Tehran on Sunday.

“There is no doubt that Americans have come to the conclusion today that the path and strategy they had chosen was based on a miscalculation and will not affect the great Iranian nation”.

He continued, “We will never go to the negotiation table with weakness, but we will explicitly and powerfully have our say before the world.”

In response to a question about the outcome of Iran's efforts to implement its proposed plan, known as the Hormuz Peace Endeavor (HOPE), for ensuring security in the Persian Gulf, Rouhani said, "It is clear to the world that there will be no peace in this region without Iran's presence. Regional stability only materializes in the presence of an important and powerful country such as Iran."

In an address to the 74th session of the General Assembly on September 25, 2019, Rouhani said as a steward of maritime security in the Persian Gulf and the Strait of Hormuz, Iran invites all countries that are affected by developments in the strategic region to join the country’s new regional peace initiative.