IRGC Commander:
Every Vote A Slap in Enemy’s Face
TEHRAN (defapress) – Commander of the Islamic Revolution Guards Corps (IRGC) Major General Hossein Salami predicted massive participation of people in Friday’s elections in Iran, saying Iranians’ votes will be a slap in the face of an enemy that hopes for a low turnout.
News ID: 80276 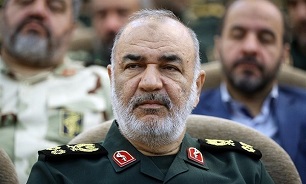 Speaking to reporters on the sidelines of a ceremony in Tehran on Thursday, Major General Salami said the Iranian people “as always will surprise the world and frustrate the enemies.”

The people will once again create a beautiful scene with their enthusiastic presence in the polling stations, he added.

The senior commander went on to say that every vote cast will be “a slap in the face of an enemy that hopes people will not participate in the elections”.

The nationwide votes for the parliament and the midterm election of the Assembly of Experts will be held simultaneously on Friday.

Candidates concluded their campaigns at 8 AM local time on February 20, precisely 24 hours before voting begins.