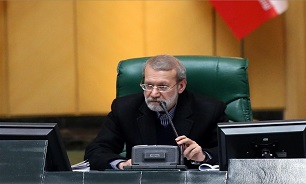 Addressing an open session of the parliament on Monday, Larijani expressed his gratitude to the Iranian people for the recent nationwide rallies marking the 1979 Islamic Revolution victory and their participation in the Friday elections and said, “The dear nation, by going to the ballot boxes, has given credit to the main pillar of democracy (parliament).”

By electing their representatives, the people determined a major part of the path to rule the country over the next four years, he added.

The parliament speaker also offered his congratulations to the candidates who were elected in the polls  and expressed hope that they will work hard to fulfill the demands of the nation, given the sensitive conditions of the country.

Also, people in five provinces, North Khorasan, Razavi Khorasan, Fars, Tehran, and Qom went to the polls to elect 7 candidates running for the midterm election of the 88-member Assembly of Experts, a high-ranking body that elects the leader of the Islamic Revolution.