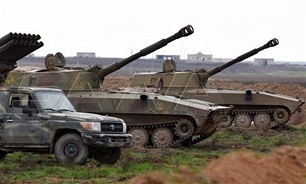 According to SANA, the army units operating in the area of Kafr Ouwaid in Idlib’s southern countryside on Saturday engaged in heavy clashes with Jabhat al-Nusra terrorists and inflicted major losses on them.

Terrorist groups including al-Nusra are attempting to attack Syrian army’s positions with the support of Turkish drones, but the Syrian troops have so far managed to repel their attacks.

In the direction of Saraqeb, the army units continued targeting the positions, supply lines, and movements of terrorists with artillery and rocket strikes.