Iran's Mousavi advises US to revise presence, behavior of its troops in region
TEHRAN (defapress) – In reaction to Trump's remarks about the recent attacks in Iraq, Foreign Ministry Spokesman Seyyed Abbas Mousavi said that Trump should review the presence and behavior of his troops in the region instead of risky actions and baseless accusations.
News ID: 80490 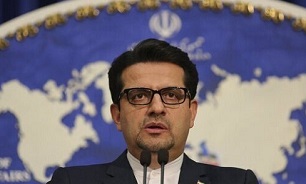 “The US cannot place the consequences of its illegal presence in Iraq and the reaction of Iraqi people to the assassination and killing of their commanders on others by escaping forward,” said Mousavi on Friday.

“Instead of risky actions and baseless accusations, Trump should thoroughly review the presence and behavior of his troops in the region and strongly avoid projection and accusations to justify irrational behavior and escaping responsibility,” he added.

In a statement, Pentagon said the US conducted defensive precision strikes against Kataib Hezbollah facilities across Iraq.

"These weapons-storage facilities include facilities that housed weapons used to target the US and coalition troops," it said.