Al-Nujaba’s response to missile attack against Camp Taji
TEHRAN (defapress) – Through a tweet, ash-Shimmari severely criticized American mercenaries for their objection to last night’s attack against the military base of the occupiers.
News ID: 80494 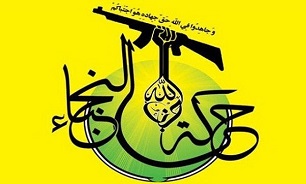 The official spokesman of al-Nujaba Islamic Resistance, issuing a twit some minutes ago, severely criticized the objections to last night’s operations against Camp Taji, and then mentioned, “You are condemning the killing of occupiers-the ones who must leave Iraq due to the enactment of the Parliament- and, you were silent over the Americans crimes of killing the grand Iraqi commander of the Resistance, Abu Mehdi al-Muhandis, the guest, Haj Qasim and the combatants who had defended Iraqi borders, the crimes that are violations of all rules and concepts”, reported al-Nujaba’s Centre for Relations and Media Affairs in Iran.

Engineer Nasr ash-Shimmari added, “Thereby, alas! The slaves like you are too timid to stand against oppressors of the time, the US.”

Expressing satisfaction over the insecurity of Iraq for occupiers inside Iraq, especially the US, he pointed out, “The operation did a great job as it revealed the true identity of the insincere mercenaries who have covered themselves with the clothe of nationalism.”

It should be noted that in the evening of Wednesday, 3,11,2020, more than 12 missiles were fired against Camp Taji; the attack that led to the killing of two Americans, one British personnel and also the injury of more than 15 ones, as American resources reported.