Iran’s Rouhani Urges Concerted International Action against Coronavirus
TEHRAN (defapress) – Iranian President Hassan Rouhani, in a letter to a number of world leaders, stressed the need for collective cooperation among all countries to counter the outbreak of the new coronavirus, known as COVID-19.
News ID: 80512 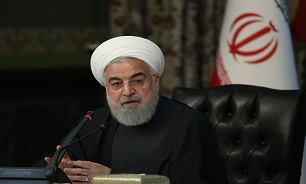 In the letter, released on Friday, Rouhani referred to the coronavirus epidemic around the globe and said, “This virus does not know any boundaries and chooses its victims without any political, religious, ethnic or racial considerations.”

“Confronting the virus requires taking coordinated regional and international actions on the one hand, and adopting tough measures, meeting the basic needs of the people, providing financial support for those affected by the suspension of businesses, enormous health and medical costs, etc. on the other hand,” he added.

“The implementation of these measures requires a strong economic power and a budget of tens of billions of dollars,” wrote the President.

In the letter, Rouhani also pointed out that the Islamic Republic, unlike other countries struggling with the virus, faces serious obstacles and restrictions stemming from two years of widespread illegal sanctions, maximum pressure policy and systematic government obstructions by the American government.

“In recent years, the US regime has imposed more than 100 sanctions against the Iranian people and government and added about 1,200 Iranian individuals and entities to its sanctions lists,” he went on to say.

“It is time that the international community stood up to the US’ unlawful and inhumane bullying and did not let the cruel US sanctions against Iran affect the battle against his fatal virus,” Rouhani said.

Jahanpour added that 1,365 fresh cases have been added to the number of the confirmed infections during the period, bringing the total to 12,729.

More than 4,300 of those with confirmed infections have recovered so far, he added.

First detected in Wuhan city in central China in December, the virus has spread to more than 120 countries, infecting more than 140,000 globally.