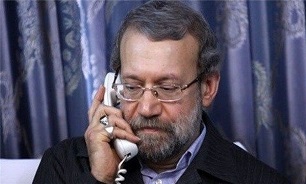 Kuwaiti Parliament Speaker Marzouq al-Ghanim in a phone call with Larijani conveyed Kuwaiti Emir Sabah Al-Ahmad Al-Jaber Al-Sabah's greeting to Larijani as well as his concern over his infection with the disease.

"You are a valuable and influential figure in the region," he said while wishing Larijani full recovery on behalf of the Kuwaiti emir and people.

He also hailed Larijani as an outstanding figure in the Muslim World's parliaments.

The Iranian health ministry announced on Sunday that 87 patients infected with COVID-19 virus have lost their lives in the past 24 hours, as the country has continued to witness a meaningful downturn in the number of victims throughout the last week.

“1,343 more patients infected with COVID-19 virus have been identified in the country since yesterday based on confirmed diagnosis criteria,” Jahanpour said on Sunday.

He said that the total number of coronavirus patients in Iran has increased to 82,211, adding that 5,118 people have lost their lives due to infection to the virus, including 87 in the past 24 hours.

Jahanpour, meantime, said that 57,023 infected people have been treated and dismissed from hospitals, expressing concern that 3,456 patients infected with COVID-19 virus are in critical conditions.

The coronavirus COVID-19 is affecting approximately all countries and territories around the world. The virus was first reported in the central Chinese city of Wuhan late last year. It has so far killed more than 161,000 people and infected over 2.3 million others globally.