Iranian Spokesman Urges US to End Abject Unilateralism
TEHRAN (defapress) – The spokesperson for the Ministry of Foreign Affairs of Iran lashed out at the US president for ignoring the international treaties, stressing that Washington must end its policy of unilateralism.
News ID: 81045 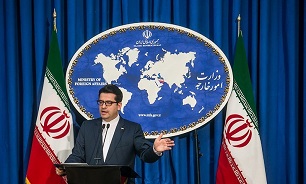 In a post on his Twitter account on Friday, Foreign Ministry Spokesman Seyed Abbas Mousavi highlighted the irresponsible nature of the US government which has scrapped the 2015 Iran nuclear deal, known as the Joint Comprehensive Plan of Action (JCPOA), and many other international agreements.

"The JCPOA is neither the first nor the last of the multilateral achievements Trump withdrew from. The US regime has sought to secure its short-term interests at the cost of nations' long-term prosperity,” he noted.

“The regime must END its abject unilateralism,” the Iranian spokesman underscored.

Mousavi has ended his message with the hashtag “Never Trust Irresponsible US”.

On May 8, 2018, US President Donald Trump pulled his country out of the nuclear accord and intensified sanctions against Iran.