Russia:
US Assertion of Iran Nuclear Deal Membership ‘Ridiculous’
TEHRAN (defapress) – Russian Ambassador to the UN Vassily Nebenzia condemned as “ridiculous” Washington’s insistence on presenting itself as a member of the 2015 nuclear deal between Tehran and world powers two years after it quit the agreement.
News ID: 81090 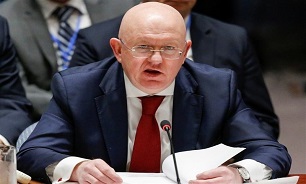 “This is ridiculous,” Nebenzia told reporters. “They are not members, they have no right to trigger,” he said, Reuters reported.

Last month, US Secretary of State Mike Pompeo said Washington technically remained a “participant” in the deal, known as the JCPOA, in order to use a mechanism embedded within the accord to make the UN maintain an arms embargo on Tehran.

Nebenzia said the US should consider whether it would be worth it.

“Snapback will definitely be the end of the JCPOA ... The most intrusive inspections of a country by the IAEA will cease,” he warned. “Is it in the US interests that it happens?”

Asked if Russia would veto such a resolution, Nebenzia said, “I never answer questions before the right time comes, but you may make a wild guess ... I do not see any reason why an arms embargo should be imposed on Iran.”

In May 2018, US President Donald Trump unilaterally pulled his country out of the 2015 nuclear deal, in defiance of global criticism, and later re-imposed the sanctions that had been lifted against Tehran as part of the agreement.