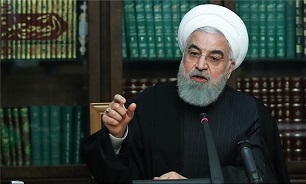 Today, the regional countries are facing many problems, he said, adding, "Bolstering all-out relations and cooperation between friends can be a way to overcome problems."

"The Islamic Republic of Iran stands by the Iraqi government and nation like before, and favors protecting Iraqi sovereignty and non-interference of foreign powers in the future of the country’s government and people," he noted.

Iraqi president, for his part, congratulated the arrival of Eid al-Fitr in advance, stressing the need for further development of relations and cooperation between the two countries.

Referring to the importance of Iran-Iraq political relations, he said, "The stability and security of Iraq require cooperation between friendly and neighboring countries, especially with the Islamic Republic of Iran."

Rouhani, during a phone contact, congratulated al-Kadhimi on his appointment as the new Iraqi premier, adding that, “Iran pays special attention to the friendly and neighboring country’s independence, political stability, national sovereignty, and unity.”

He expressed hope that Iran-Iraq cooperation will be expanded in the future.