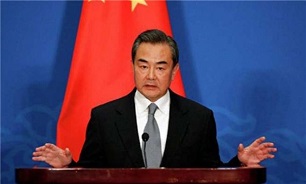 China and Britain, as two major countries with global influence, share the common responsibility of safeguarding world peace and development, Wang said, adding that strengthening mutually-beneficial cooperation in a wide range of fields between the two sides is in the fundamental and long-term interests of the two peoples, Xinhua reported.

Hong Kong affairs are purely China's internal affairs and no outside interference is allowed, Wang said, pointing out that maintaining national security in Hong Kong concerns China's core interests, thereby a major issue of principle that must be adhered to.

The central government is responsible for upholding national security in China, as is the case in any other country, Wang said.

Faced with the actual harm and serious threat to the national security in Hong Kong, the National People's Congress (NPC) has decisively introduced new national security legislation for application in Hong Kong, which will help fill the obvious loopholes and long-term deficiencies in such area for Hong Kong as soon as possible, he added, adding that such a move is reasonable, legal and imperative.

The current capitalist system in Hong Kong will not change, nor will its rights to a high degree of autonomy enjoyed under the Basic Law, or the way of life of the Hong Kong citizens, Wang said, adding that the national security legislation will only improve Hong Kong's legal system, social order and business environment.

Both as permanent members of the United Nations Security Council, Wang said, China and Britain should set an example in abiding by the basic norms of international relations and not interfering in other countries' internal affairs.

Looking back on the history of China-Britain relations, China has never interfered in Britain's internal affairs and has never pointed a finger at Britain's domestic affairs, Wang said.

China hopes that Britain will respect the Constitution of the People's Republic of China and the Basic Law enacted in accordance with the Constitution, respect China's legitimate right to safeguard national security on its territory, and respect the Chinese central government's administration of Hong Kong under the principle of "one country, two systems", Wang said, adding that the British side must adopt a cautious attitude on this affair.

For his part, Raab said Britain is committed to developing a strong bilateral relationship with China, expressing belief that after the COVID-19 pandemic, the two sides will further strengthen cooperation on major international and regional issues including climate change and Iran's nuclear issue.

Within the framework of a mature Britain-China relationship, the two sides can have a candid exchange of views on any topics, Raab said, adding that Britain is willing to deliberate on the contents of today's in-depth exchanges, and continue to communicate with China in the spirit of mutual respect.