report:
Another Iranian ship en route to Venezuela
TEHRAN (defapress) – Iran appears to have dispatched another merchant ship to Venezuela despite Washington’s threats against both nations, according to reports.
News ID: 81363 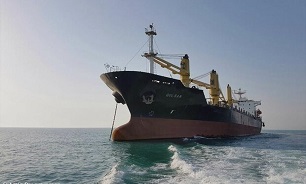 Washington Post stated an Iranian ship ‘Golsan’ is expected to dock in Venezuela soon, an arrival that comes shortly after the five tankers loaded with gasoline delivered to Venezuela.

According to the American media, Golsan is moving towards the Venezuelan coast, and Russ Dallen, head of the Miami-based investment company, says the ship is carrying parts to continue repairing Venezuelan refineries.

The vessel is expected to anchor in Venezuelan ports on Sundays or Mondays.

Last month, a five-tanker Iranian-flagged flotilla carried up to 1.53 million barrels of gasoline and components to Venezuela to help the country ease an acute scarcity that has forced Venezuelans to wait for hours in lines at service stations.

According to the Maritime Traffic Center, Golsan left the port of Shahid Rajaei in Iran on May 17 this year and its current speed is about 13.1 knots. Each node is 1852 meters per hour.

The Golsan tanker was built in 1998, is now carrying fuel under the flag of the Islamic Republic of Iran.

Iranian tankers continue to enter Venezuelan ports and refineries as the US government has previously threatened to block new oil tankers between Tehran and Caracas to prevent them from reaching the Venezuelan coast.

With the arrival of Iranian tankers in Venezuela, the Caracas government and nation thanked the Iranian people for their solidarity in sending fuel to the country and promised to continue fraternal relations between the two countries.