Maduro:
Trump Threats Against Venezuela Meant to Boost His Reelection
TEHRAN (defapress)- Venezuela's government condemned a recent threat by US President Donald Trump who last Friday said he would be fighting to free Venezuelans from the Maduro regime.
News ID: 81530 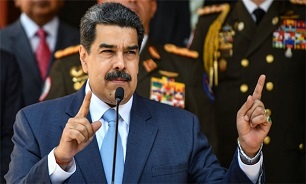 Thus he deployed US navy ships for an anti-drug operation along the Caribbean sea, which is near the Latin American country, presstv reported.

Venezuela's President Nicolás Maduro asserted that Trump's words sound like the rhetoric of a ruler who is desperate seeking reelection by taking irresponsible actions to boost his supporters.

Before Maduro's remarks, Trump had made a hostile speech against his Venezuelan counterpart. In this context officials support Maduro's stance of protecting the homeland.

Meanwhile experts believe Trump's aggressive policy will not intimidate Maduro. President Maduro seems to have established stability despite explicit military threats from the US leading the country to prepare for the upcoming parliamentary elections scheduled for December.