Iran’s Zarif:
US Contempt for Law Threatens Global Security
TEHRAN (defapress) – Concurrent with the fifth anniversary of the 2015 nuclear deal, Iran’s Foreign Minister Mohammad Javad Zarif said Washington’s contempt for law and diplomacy threatens the global security and should not be a yardstick for international norms.
News ID: 81545 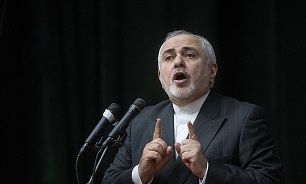 “Today is 5th anniv. of the #JCPOA—last decade’s greatest diplomatic achievement—and reminder that US lawless behavior should not be the yardstick by which int'l norms are measured. US contempt for law & diplomacy places it in global disrepute & threatens global—and US—security,” Zarif tweeted late on Tuesday.

Josep Borrell, the EU’s foreign policy chief, issued a statement on the occasion of the fifth anniversary, pledging “to do everything possible” to salvage the accord.

The deal, known as the Joint Comprehensive Plan of Action (JCPOA), is “a historic multilateral achievement for global nuclear non-proliferation,” Borrell said.

“The JCPOA remains the only tool to provide the international community with the necessary assurances regarding Iran’s nuclear program… The full implementation of the JCPOA by all sides remains crucial,” he said.

The deal was reached between Iran and a group of countries then known as the Group 5+1 — which included the United States, Britain, France, Russia, China, and Germany — on July 14, 2015. However, in May 2018, US President Donald Trump unilaterally pulled his country out of the JCPOA and re-imposed the sanctions that had been lifted under the deal.

Verified by the International Atomic Energy Agency (IAEA), Iran remained fully compliant with the JCPOA for an entire year, waiting for the co-signatories to honor their commitments and offset the impacts of the US withdrawal.

But, as the European parties continued to renege on their obligations, the Islamic Republic moved in May 2019 to suspend its JCPOA commitments under articles of the deal covering Tehran’s legal rights in case of non-compliance by the other side.