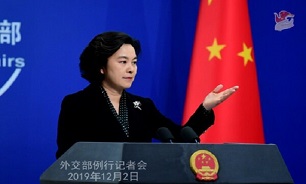 "Pompeo's remarks are totally unreasonable and apparently an excuse to push the UN Security Council to extend arms embargo against Iran," she said in reaction to the US Secretary of State Mike Pompeo's remarks at a press availability that when the UN arms embargo on Iran expires on October 18, China will sell weapons systems to Iran and they have been working on it.

"This is another proof of the untrustworthy and unreliable US turning away from its commitments, after defying UNSCR2231 and international consensus and unilaterally withdrawing from the JCPOA. We hope the US will return to the right track of upholding the sanctity of the Security Council resolution and complying with the Iranian nuclear deal, instead of going further down the wrong path," she added.

In June, the United States introduced a draft resolution at the UN Security Council to extend the arms embargo on Iran before it expires in mid-October. Russia and China have already voiced their opposition to the draft resolution.