Trump Attacks Mail-Voting After Suggestion to Delay 2020 Election Misfires
TEHRAN (defapress) - US President Donald Trump has once again taken aim at the notion of having all voters cast mail-in ballots in the 2020 presidential election, after his idea of postponing the election fell flat among lawmakers.
News ID: 81677 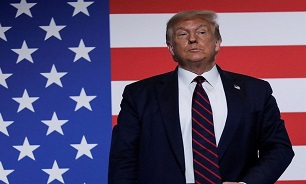 “Must know Election results on the night of the Election, not days, months, or even years later!” Trump tweeted on Thursday, shortly before arguing that “universal mail-in voting” at the November election will turn it into the “most inaccurate and fraudulent election in history.”

Trump, who has emerged as a staunch opponent of the concept, repeatedly suggested that the mail-in voting procedure is vulnerable to widespread abuse, adding that he is “glad” that the media has “finally” taken notice of the issue, RT reported.

“Glad I was able to get the very dishonest LameStream Media to finally start talking about the RISKS to our Democracy from dangerous Universal Mail-In-Voting (not Absentee Voting, which I totally support!)”

Trump has frequently said that if the mail-in system that is currently in effect in five states is to be expanded to the rest of the US, mass voter fraud is virtually inevitable.

However, Thursday was the first time he floated the idea that public concerns around the Covid-19 pandemic could possibly warrant a delay of the vote.

The idea of postponing the election fell flat among lawmakers on both sides of the aisle, however. Trump critics on Twitter immediately seized on the idea, sending ‘President Pelosi’ trending. Pelosi, as the Speaker of the House of Representatives, would be the person to take the reins from Trump on January 20, 2021, unless the delayed election was held by that time.

Senior GOP lawmakers in Congress dismissed the idea as well, with both Senate Majority Leader Mitch McConnell and top House of Representatives Republican Kevin McCarthy speaking against setting a precedent by rescheduling a vote.

After facing bipartisan pushback, Trump backtracked and said that he had not been seeking a delay of the vote – but he doubled down on his concerns that the results of the mail-in voting may never see the light of the day.