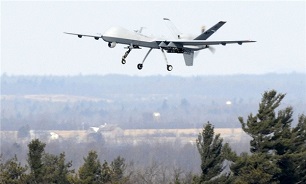 “The air defense system of the Yemeni army could shoot down an RQ-20 spy drone over Haraz region near the borders of Saudi Arabia on Sunday,” Saree was quoted by the Arabic-language al-Masirah news website as saying.

He added that footages have been taken by the army of downing the US spy drone.

The spokesman declined to present details on the kind of surface-to-air system used to bring down the US aircraft, and just said it was a proper weapon.

The US has been a major backer of Saudi Arabia ever since it formed a so-called military coalition campaign against Yemen.

Since March 2015, Saudi Arabia has been waging a bloody military aggression against Yemen with help from its regional allies, and using arms supplied by its Western backers. The aim of the war has been to bring former President Abd Rabbuh Mansur Hadi back to power and defeat the Houthi Ansarullah movement.

Over 100,000 people have lost their lives as a result of the military aggression in the past five years, according to some figures.

The war has also destroyed, damaged and shut down Yemen's infrastructure, including a large number of hospitals and clinics.

The Yemeni population has been subjected to large-scale hunger and diseases aggravated by the naval blockade imposed on the country by the coalition of aggressors.